Some answers to your questions!

How long have you been drawing for?

Always scribbled whenever I could growing up, but got more serious about wanting to get better in 2008.

What software do you use?

I use a mix of Paint Tool SAI2, Clip Studio Paint and Photoshop depending on my needs at the time, I also use Toon Boom Harmony for animations! Oh, and maybe also After Effects but my grasp of it is very rudimentary, lol.

What tablet do you use?

Currently use a Cintiq Pro 24.

You haven't posted in a while! Are you dead?

When I am dealing with stuff outside of my person or have things weighing of my mind, my social battery is almost non-existant until I have troubleshot whatever’s thrown a pebble in my gears. In those times I can’t stand to go anywhere near social medias with a 10ft pole and I choose very carefully what information goes in my noggin to not worsen stress and keep my priorities straight. I’ll catchup, I just need time. （◞‿◟）

Why do you draw boobie stuff?

For a more honest answer, It’s just fun. I like tongue in cheek silly themes, references or puns combined with eroticism, I don’t know, it adds a layer of personality to it. I often think of something, go ‘lol wouldn’t that be stupid to turn this sexual’, and I do it.

It’s also sometimes a copium outlet to tap into cynicism while staying optimistic. Something is exhausting or frustrating? Turn it ridiculously sexual to vent; now you gave yourself a laugh, feel better and on top of it all was productive. Profit!

I just enjoy drawing and not being limited in mixing up my stupid dad-jokes, shitposting and all hentai/adult cartoon has to offer in playful opportunities.

Someone is selling content containing your Meruccubus! (ex: 3D model for VRchat)

If I think about it, it’s technically no different from artists doing fanart commissions, convention merch and models of cartoon/anime/game characters.

I wouldn’t feel good about myself if I started thinking like Nintendo with all the fanart/fangames DMCAs, haha. Why not, let people have their fun! It would be incongruous with my values to stop people from filling a gap in the market I have no ability to fill (because of skills or time issues) and earn money for their work on top of it! If something doesn’t prevent me from doing my regular thing, I don’t see the use of wasting mental-real estate concerning what others do when I’m not looking (*´꒳`*)

Can I draw your OC ? Do you have a reference sheet ?

OF COURSE I WOULD BE HONORED! Make sure to have it find its way to me when it’s done ٩(◦`꒳´◦)۶ As for reference, I keep rules very loose with her just so I can fit any mood or theme I’m aiming for when I put her in silly shenanigans. Any details you need to know are written in the sheet!

If you post it on twitter and tag me in the post, I will see it eventually if notifications work as intended, but otherwise you can send it privately to me so I can add it to the gallery here!

Can I repost your artworks around the interwebs?

Sharing is caring! You’re free to spread my artworks around and repost them. Credit me – or don’t – I can’t police what you do and I’ve made peace with the internet being the ‘World Wide West’ and people will just do their thing regardless of what I say.

Sourcing the website or my twitter account is appreciated but I won’t die if you don’t, I don’t care, just enjoy my work, it’s all that matters. (人´ω｀*)♡

Can I use your emotes in my own discord server?

Go ahead! Hope you have fun with them ∠( ᐛ 」∠)＿

Do you take commissions? What about requests?

I do not at the moment and I don’t know when I intend to do so. I have enough of a hard time juggling everything I need to care for on top of keeping up with my inhumane standards, lol.

But if you have ideas for me, I’m always open to pick people’s brains, gets the gears moving in the brainstorm sessions! You can run your fanart and succubus ideas here.

Someone is either reposting you without credits / RPing with your succubus / Selling your art on RedBubble!

For Redbubble, their way to counter it is the same way youtube does DMCA. I don’t feel affected or bothered enough by it to the point of willingly doxing myself to this one random guy and hope for the good ending, lol.

Otherwise, I have to be realistic & weight costs-benefits. I’ve accepted it as part of the risks of online presence. Attempting to control the entire global population is an impossible task and it will keep happening regardless of my intervention – Internet will just internet.

I believe people who appreciate the creative process and like my work will track me down & support me if they want to. Those who don’t see value in sourcing or supporting artists wouldn’t support me to begin with and can’t have their mind changed. Going out of my way to pick fights with people can’t bring any kind of positive outcome, lol.

I also haven’t invented the concept of black-haired red-skinned horned monster girls, so no need to jump the gun when you see a demon in a game by saying they stole it. Some of the main features that visually makes Meru, well, Meru, are the striped horns & tail and the irises (aside from other small details like the mole on the cheek), so watch out for those (･ω<)☆

I’d rather focus that energy on that which I have the ability to control and just make more goob art! (*•̀ᴗ•́*)و ̑̑✧

Meru, INTJ, thick skinned and stubborn, workaholic. That’s about all you need to know.

Where are you from? What's your first language?

Canada (the side that doesn’t say sorry), I commonly speak what could be described as Frenglish, lol. French is my first language but I switch back and forth every few words in english just because, you know, internet media consumption. 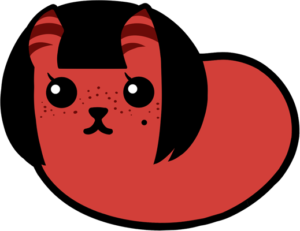